You are here: Home › Our Services › Barbecue Upgrades 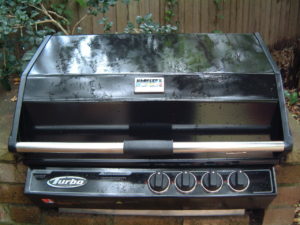 deteriorated over time. These parts could include anything from valves, ignitions, control knobs,  rock trays, burners grills and hot plates etc. We carry and stock a large range of gas bbq parts for your bbq upgrades which means we can complete a simple or difficult job in one easy visit saving everybody time and expense.

You may on the other hand want us to completely replace the BBQ as many do in the case of built in units as pictured below.
BBQ Rescue can service and upgrade your BBQ to achieve optimum performance.

In this case our customer opted to replace the bbq rather than referbing the old one. With a roasting hood on the new bbq  means they can cook that Sunday roast and many other meals with ease.

This bbq had the normal BBQ Rescue treatment starting with a full bbq clean and service. Then we replaced the ignition system serviced all gas cocks and replaced control knobs.

Our customer opted to replace the cast iron grill and plate with stainless steel grill and plate. We also replaced the burners, rock tray and ceramic tiles. With a bit of TLC from BBQ Rescue this bbq is as good as new and ready for a big Aussie bbq season ahead. After this bbq makeover this bbq will have many more years of use.